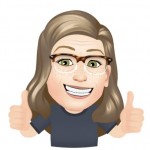 My grandmother taught me to hand quilt and I made my first quilt with her in about 1974. I made a few small quilts, and started a nice quilt in 1985 for my daughter, before she was born. Then she was born, the quilt got rolled on the rail about half quilted, and that was the end of that. Until 2018 - retired, I have no excuse. I finished the quilt and then made a new huge one for our bedspread, and the snowball started to roll! Loving being a quilter again.