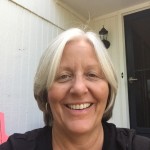 Hi, I am Pamela Diane. What’s not to love… I love… My husband of 40 years who is Mickey Our two daughters who call me Mama and Mommy Our two grandchildren who call me Mimi My sister and brothers who call me Peter Pam The rest of my immediate and extended family Special people in heaven who are near and dear to my heart All our motorcycle friends My sewing and quilting buddies 32 years at AT&T as a Technical Architect (mainframe computer geek) Being retired since October 2011 (I think) My two motorcycles, Julianne and Annabelle Traveling this beautiful country Flowers and Gardening Publishing and writing Sewing and Modern Quilting The color green, and orange, and purple ( any bright color) Fabric, fabric and more fabric Clocks even though I’m never on time or adhere to a schedule Giraffes because they are quiet like me and alway have their head in the trees like me and Living on the Edge. I am grateful every day for my faith in God and to the men and women who fight for our freedom.