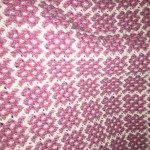 I started knitting in 2008 to fill up the time I spent as a caregiver for my little sister. In 2018, I sustained an injury that required surgery for a seriously torn rotator cuff. I have recovered well, but I can no longer knit for more than 3 hours at a time. I always wanted to quilt, so I started quilting in October 2019. My love of color and fabulous design has been my guide during this pursuit and I am in love with the process. (And between the sewing machine, the cutting board, and the ironing board, I have no shoulder problems with repetitive motion! Win-win!)